How to Scan a QR Code 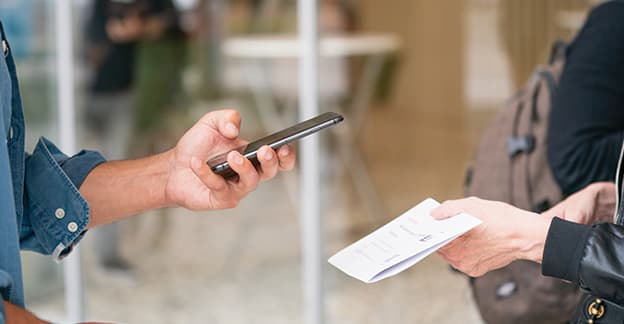 Last week I went shopping with my mum. Nothing out of the ordinary there.

As we entered the shopping centre we were prompted to “check-in” via a QR code on the door, so far, so normal.

It was at that moment I noticed mum had pressed the camera shutter on her smartphone and walked into the lobby. Surely not? She must have tapped the link to sign in already, right?

And that’s how I found out my mother had several hundred photos of QR codes on her smartphone’s camera reel. So rapid has the rise in prominence of the humble QR code been, that no authority has done a good enough job to educate the general public about how to scan a QR code.

The great news is most devices will be able to scan using QR codes using their native camera apps. For some older phones you may need to install a QR code scanner app.

Here’s a whistle-stop guide to scanning QR codes on iOS and Android devices:

How do I scan a QR code with my iPhone?

There are 3 steps to scan a QR code on an iPhone:

1. Open up your phone’s Camera app.

3. Tap the pop-up notification that appears at the top of your screen.

How do I scan a QR code with my Android?

There are 3 steps to scan a QR code on an Android phone:

1. Open up your phone’s Camera app.

3. Tap the pop-up notification that appears at the bottom of your screen.

And there you have it. Simple, fast and effective, the humble QR code can be used to great effect on tickets, QR code business cards like Blinq or location check-ins.

Find out how you and your business can make the most of QR code digital business cards by creating your own card today!

Blinq also offers a fantastic business product that you can enjoy free for 30 days, get started today by clicking here.